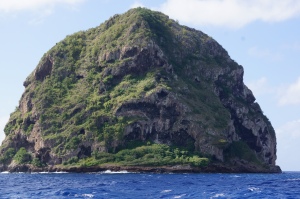 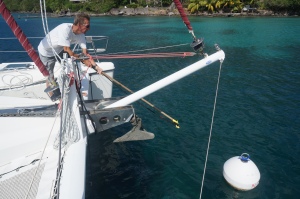 Having been offered a few days with Jonathan and Karen on Avanti, a very comfortable catamaran (for sale if you are interested 🙂 ), we sailed up to the French island of Martinique. At anchor in Le Marin, some time was spent in protracted negotiations for the new engine, having seen one in the dealer’s window. The clincher for the deal was that they could fit it next week, way ahead of every other option.

Having resolved this, time to enjoy the island. The next morning was Sunday, and the yoles were out. These local sailing boats are colourful and unusual. The crew have long poles that they fit to the hull, and then hang off them like a trapeze. It is a fascinating sight, with the crews showing great skill.

A visit was also made over to Saint Anne’s, a small village a few miles away. Sadly it was almost entirely shut down for the break and we struggled to even get some basic foods. So it was back to Le Main for some superb meals, and a visit to the supermarket. Suitably stocked, the anchor was stowed and it was off to Great Anse, a bay a few miles to the North, for New Year’s Eve.

On the way, we passed (HMS) Diamond Rock. This forbidding lump of real estate rises almost sheer out of the sea, and unbelievably was once a Royal Navy ‘ship’. Somehow they managed to get some canons up onto it, and a ‘garrison’ was maintained for many years to harass the French, and disrupt their colonial ambitions. This was only overcome by perfidious means. The French loaded a small boat with barrels of rum, and set it adrift to float down to the rock. The results were predictable, the garrison being easily overcome when comatose…

And so we moored and in Great Anse, initially with the aid of Jonathan’s new Magic Mooring Gadget. However having just captured the buoy, we did not even have time to drop to the deck at the loud bang with the accompanying supersonic plastic shrapnel! Having attached ourselves by more conventional means, Annemarie jumping in the water, we found we were too late to get a table in the beach restaurants for New Years Eve. Despite this minor setback, we fortified ourselves with homebrew rum Painkillers, and saw the new year in accompanied by the Massed Snorkel Band for Auld Langs Syne, Morris Dancing, fireworks and the horns and hooters of all the boats in the bay! Utterly brilliant!

We live in expectation of forgiveness from our combined relatives, for some of the phone calls to exchange good wishes might not have been quite as intelligible as we would have wished. It would be nice to put this down to bad signal, but that would be a little dishonest 🙂

Anyway, after a gentle start, it was a short run round to Fort de France, where we await the ferry back to Rodney Bay and Freebooter.

May we wish everyone a very Happy New Year, and all the best for 2014.