The Karoo desert that starts about 3-4 hours drive from Cape Town, to be visited for the dramatic landscapes. That and the isolation.

Starting from Cape Town, take the N1 to Robertson and then branch off onto the classic Route 62. Meander through the sweeping hills, with a winery/breakfast halt at Nuys. Our first night was spent at Minwater, up a remote farm track to an eco-camp.  Driving past ancient farm machinery, we were the only campers in this bush site. Complete with eco-loo and bucket shower (hot water from the large kettle over the fire!), it was a cosy night.

Day 2 saw us driving up the Swartberg Pass, a dramatic climb into the mountains that mark the boundary of the Karoo proper. The narrow dirt road weaves its way ever up until we turned off for Gamkaskloof at the top. Otherwise know as ‘Die Hell’, the road is a 40km track to a remote isolated valley settled by early Dutch farmers. There were only footpaths until the early 1960’s, so until then everything had to be carried in on foot or by horse. 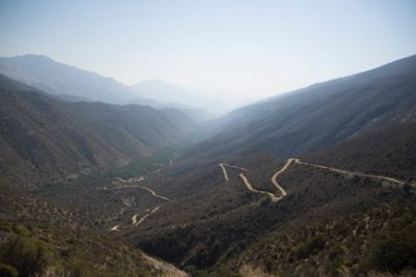 Given the distance to the nearest towns, Prince Albert/Calitzdorp/Oudtshoorn, that was no mean feat. However, as soon as the track was carved out by a very reluctant council, (there were only about 100 residents!), the community promptly collapsed with the youngsters fleeing as soon as they could! The houses have now been restored as accommodation, with a camping ground not that far away. There is an interesting visitor office together with the original tiny watermill.

The second night’s stay was abandoned after a baboon troop turned up for afternoon tea, so then the slow drive back and over the remainder of the Swartberg Pass to Prince Albert, a pretty little town where nothing is likely to ever happen in a hurry. (Visit the dairy and try the cheeses! A return trip to the town is definitely on the cards, not least to try the cookery school!)

With a ‘spare night’, we drove up the back way, crossing and re-crossing dried riverbeds (and losing our jockey wheel), to Fraserberg, a small town where we spent an entirely forgettable night, before again taking the rural road to Sutherland. The route is remote and the desert dramatic. The land is ‘farmed’ with sheep (think hectares per sheep!), and the odd bok (antelope), but very few people indeed. The occasional abandoned farm, fences and wind-pumps are the only sign of human endeavour, other than our first sighting of a corbelled stone house. These are round with a domed stone roof, logical given the lack of other available materials. 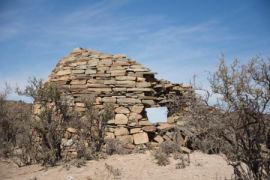 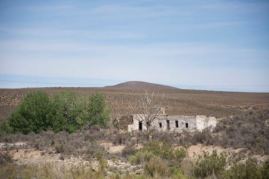 Sutherland is best known for its (disputed) claim to be the coldest place in South Africa, and also for its telescopes. Its clear skies have drawn astronomy organisations from around the world to build their observatories here, all remotely operated. The biggest is the huge SALT one, with its 11m diameter multi-faceted mirror.  There are tours available as well as night observations. (Hint – try taking a photo through the eyepiece with your phone!). Also do stop at the Whitehouse Inn for an awesome lamb burger!

Due west of Sutherland is the Tankwa Karoo park. A spectaular route to follow goes via the Ouberg Pass, a steep ‘road’ that follows the spine of a mountain down onto the dessert plain. There you will see coloured sand/gravel grains due to different lichens. 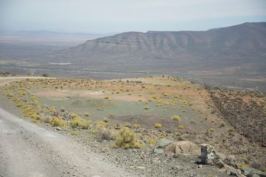 The ‘nothingness’ of the Tankwa is awesome! Photos do not do this justice. And yet there is wildlife, (even if the zebra have turned red in the dust).

Noisy frogs with their plaintive calls liven up waterholes at dusk, but miss the glorious dawn at 4am. ‘Wild’ camping means no facilities at all, we were on our own by the ruins of an old farm. 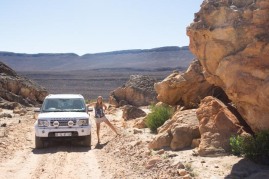 The last 2 nights were spent at Die Monde campsite by the bank of a river under the shadow of the Cederberg mountains. A cooler, very relaxed spot for swimming and walking up the river to see the ancient San rock art before heading back to Cape Town. 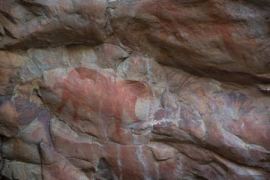