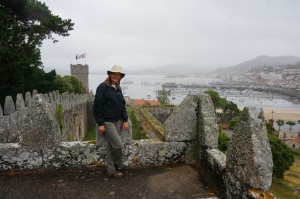 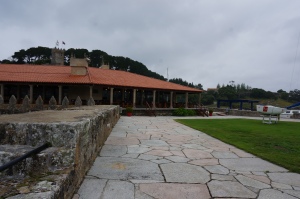 We were delighted to get an email from fellow MOA (Moody Owners Association) members Claire and William Philpot a couple of days ago. They had spotted us on AIS, and were in La Coruna at the time. They sailed in last night, just in time to join in a drinks reception at the Club. This probably supports the widely held view that MOA members will travel a good distance for a free drink!

Anyway, the occasion was to welcome a Classic Yacht Regatta to the Club, and generously, the Rally Portugal fleet was invited along. To set the scene, Monte Real is a very prestigious Club, set within the historic outer walls of a castle. Its setting is superb, and the staffing and ambiance reflect its status. The principle attendees were predominantly cadets from a naval sail training ship, plus more seasoned crews from other boats.

Anyway, the Club had laid on drinks (gin and wine), and some food. The formal opening was given by a senior officer of the Club, followed by a minimalist prize award by an obviously VIP naval officer (loads of ribbons across his chest). Then the food arrived, starting with giant prawns, superb calamari and even baby sand eels in garlic and olive oil. The cadets were slightly left behind as the gannets (the Spanish and then the RP team) moved in to hoover up the food. The youngsters drifted off, leaving the staff bringing out yet more food, paella, and keeping up the drinks.

Now I have to tell you about the gin. Gin and tonics in the Club would normally cost €19 a time, so we were told! The delivery is sublime, ice is poured into the glass (more like a 1/2 pint tumbler really), gin into a shaker with more ice, and then poured into the glass. Tonic is added by pouring it in across the back of a spoon to dissipate the bubbles, and then citrus zest is added by twisting orange and lemon peel with ice tongs. It is a masterful display, made all the more interesting by the level of thirst that develops during the 5 minutes the performance takes. The outside bar was stacked with crates of Plymouth Gin and bottles of tonic.

After a couple of buckets (calling them glasses really does not convey adequately the volume) of wine, there was a minor domestic dispute over the missing paella. To compensate, a gin was called for. Having been very well received, a second was necessary, but the tonic ran out during the pouring. As true professionals, the staff just topped the glasses up with gin…

William and I having missed out on the paella (the domestic was minor, it should be forgotten sometime in the next decade), and in need of some sustenance, it was time to head back to the boats. Bangers and mash duly appeared, and were very much appreciated.