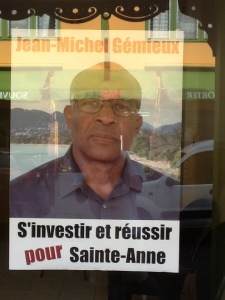 Ok, this is going to sound unlikely, but UK elections are pretty dreary but at least they are not too intrusive. Caribbean elections on the other hand……

It started on St Lucia with red flags hanging everywhere, then there were the party political broadcasts……… at 6 o’clock in the morning from a van with a public address system on the roof! I don’t know about you, but that to me is an instant vote for another party.

Martinique’s election is on 23rd March, and here at St Anne, the political parties are sticking it in the communities’ face. As we anchored last night, it was clear that something was in progress. Voices over a PA system went on for hours, making us think that this must be an animated recitation of a Norse saga. But there was no applause or shouts from an audience. It just went on and on all evening.

This afternoon, a van with speakers on its roof blasted out at horrendous volume an animated message that there was another meeting at 7 pm, apparently attendance being encouraged by the offer of food. In case there was a risk of anyone missing the unmissable, it went up and down every street in turn.

Out at anchor that evening, the rabid message was hurled out at many megawatts, with an excruciating screeching as the speakers failed to cope with both the volume and the microphone in too close proximity to them. The result was a crime against humanity, and worthy of an alternative to American waterboarding as an interrogation technique.

Worse still, it was in competition to a French Reggae band in a nearby bar.

With head under cushion, English elections seem quite discrete really…….

This entry was posted on March 15, 2014 by fb425 in Caribbean Wanders and tagged martinique, st Anne.