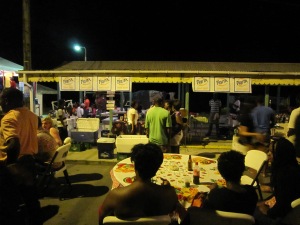 After 10 days of enforced rest after the medical stuff, and desperate for a change of scenery, we had agreed to meet up with Ocean Rainbow for a return visit to Anse La Raye. After a gentle sail down we anchored next to them in the tiny bay late afternoon. (It would have been earlier, but some things we had ordered to be ready on Tuesday did not appear until late Friday morning. This is the Caribbean!!!)

As we anchored, fishermen were circling their nets off the beach with great shouts and lots of helpers, in a process probably unchanged since biblical times. The shimmering silvery mass being then decanted into carry nets and rushed to the streets. By evening, those streets had been transformed with vendors’ tables laden with pots of piping hot fish everywhere. Wander down with a bottle of Piton beer in hand before selecting your supper from the shrimps, blackfish, crabs, mahi-mahi, red snapper, conch, whelks, and turtle. Sadly this last one was on the menu despite their preserved status. Depending on who you talk to, it is either illegal or legal ‘in season’.

At one end of the street, a stage has been set, and the music opens with a DJ getting the evening going before a jazz band takes over. These guys are good! The sax player really knows his stuff, aided by an energetic trombone and a drummer on steroids. The oriental keyboard man looked strangely out of place, but he too held up his corner. 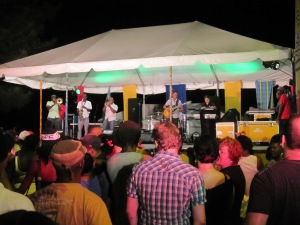 A great night out, setting us just in the mood for a lazy sail down to Soufriere the next morning. I confess to a bit of apprehension here, because the boat boys seem quite pushy. No sooner is the bow pointed into the bay than a pirogue (local wooden boat with a big outboard) is a couple of feet away wanting to take your lines. Unhappy that we want to look around before deciding where to go, he continues to shout dire warnings about the high winds and the difficulty of picking up a mooring. We escaped him, (and his £10/$17/€12 ‘fee’) but shortly after easily picking up a buoy in a sheltered spot, his compatriots start appearing, the best offering fresh fruit, the least convincing are young boys wanting to take your garbage (for a fee, before they throw it behind the nearest rock) or just plain begging. It is off-putting and lends a sense of insecurity about leaving the boat to go ashore. 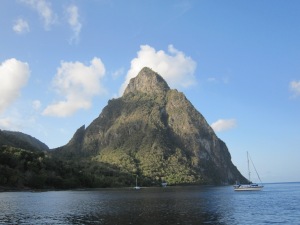 This raises another topic, begging. It is not an easy issue, particularly if you are inclined to help others. As in so many countries that have poor communities, begging from ‘wealthy’ visitors is a way of life for some. However dispensing modest (to us) sums can equate to a reasonable local wage and so we then perpetuate the problem. Denying handouts goes against the grain, but a number of local people warned us against giving money as all too frequently it is used to buy drugs, a scourge on the community.

This entry was posted on May 2, 2014 by fb425 in Caribbean Wanders and tagged Anse La Reye, Soufriere Bay.