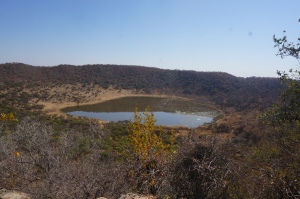 Take one bit of rock, hurl it at the ground, and what do you get? 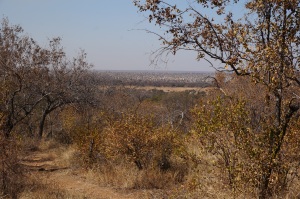 A huge hole if the rock is big enough and comes from outer space! Amazingly, no-one I talk to here seems to be aware that an amazing piece of Earth’s history is on their doorstep. Some 200,000 years ago, a passing meteorite took a swerve and landed on our planet at high speed. The result was a huge crater more than 100 metres deep and about 1.25 km in diameter. Evolution nicely landscaped it with a lake at the bottom, and it has a great view from the rim thanks to all that displaced granite.

Subsequent history involved prehistoric man carelessly leaving stone tools scattered around for anyone to cut themselves on, ancient potters not bothering to clean-up, and colonial endeavours to extract salt. The latter went on for a bit, the remains of their factories and salt ponds still there to see. Perhaps the most bizarre activity was the effort in the 1960’s to improve the marketability of the brown salt by mixing in whitewash to change its colour! Yes, really! The heap of whitewash is still there! 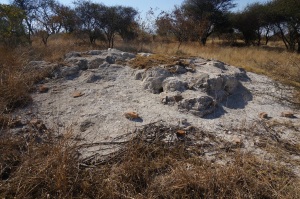 This crater is only about 40km north of Pretoria. Perhaps its low key reputation is down to it being on the outskirts of a vast township, Soshanguve, which starts on the other side of the road. Whatever, it is a shame that such a beautiful and peaceful place is so little known. For those that want to enjoy the walk round it, the site is the Tswaing Meteor Crater. Of course it might be better on a day when they are not burning off the scrub. With the opportunity to get toasted close at hand, some bits of the path called for brisk passage…

Walking back to the car, I stopped by a group of ladies sheltering from the sun in their minibus. Part of a group bringing abused children out for a walk, they educated me on some of the challenges of the darker aspects of the community. The situations they describe truly appalled, and yet these gracious God-loving ladies work to bring about hope and a future for the youngsters in their care. It was both humbling and a privilege to listen to them.

Taking a different route back, the road to Hartbeespoort saw a noticeable transition in to Afrikaaner country, the business and road signs being the most obvious clues. The town is built next to a huge, very picturesque reservoir. The head of this water is a small steep dam, over which there is a single track road. As this is governed by a very slow set of traffic signals, the African entrepreneurs are very active in trying to part their stationary audience from their money with all sorts of ‘enticing’ merchandice. But beside the hats, fruits and sunglasses, a new phenomenon was seen. This was the sight of white folk begging.

Begging seems like a national institution here. Every road junction has its vendors and its beggars. The latter stop by every held-up car and portray such abject misery that they would instantly qualify for an Actor’s Union card in any country. No caring human being can ignore the poverty, but the numbers are overwhelming. South Africa is not unique in this, but any traveller with a conscience will find themselves haunted by ignoring the multitude of pleas. But until today, I had not seen white beggars, nor old and decrepid cars and vans driven by similar folk evidently experiencing harder times.

With such a vast population of unemployed, it is not surprising that there is the need for positive discrimination for the benefit of the native Africans. But one downside is that it is very difficult for lower-skilled white people to get a job. So maybe this is another glimpse of life in this rainbow country of contrasts.

This entry was posted on July 27, 2014 by fb425 in Intervening Travels and tagged Soshanguve, Tswaing Meteor Crater.