There are times when you just have to escape the city. One suggestion had been to head north-east up to the hills. It’s a bit of a hike along a particularly boring highway, around 320 km, with few scenic distractions. Evidently the month end was nearing as the local police were on a fund-raising drive and had portable speed traps every 10 km or so. Most were pretty obvious, but sometimes you could see them hiding in the bushes with their car down in a ditch.

Off the highway, the road winds into the picturesque hills, giving us an opportunity to have a bit of a play in the new toy. Having raided the piggy bank, we now have a little sports car with ample grunt!

Turning off into Haenertsburg for lunch, we enjoyed a great value meal under the shade of the trees in this small sleepy village. The portions were absolutely huge, with the total bill only R 160, (about £8) including drinks.

Crawling at snail’s pace to avoid any stone chips, we wound our way up a dirt road to Debengeni Falls. A popular picnic area, the water slides down smooth steep rocks in a soporific way, but the signposts warn of the dangers of these extremely slippery slides.  Then off to Tzaneen where we had booked a room for the night. 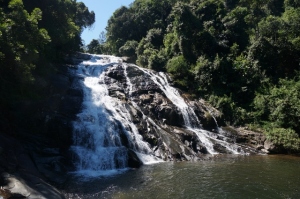 ‘Ware the hidden big drop which has claimed lives, but no wonder people are tempted!

Lovely water – I bottled it!

The evening did not get off to the best start, the key breaking off in the lock as we tried to enter. However we were soon talking to a delightful couple, Anthony and Hilary from Oundle in Northamptonshire, who live only a short distance from our house in the UK. A decision to go out for supper together was hampered by a dearth of open restaurants, the eventual choice being effectively by default. Sadly it was dire, the worst meal we have had since we started coming to this wonderful country. A guide book described the “dining scene” as “painfully ordinary”, which just about summed it up!

After a leisurely breakfast, we wound our way up to the top of the hills to visit the cycad reserve. These weird small trees look like miniature palms from a distance, but have large pineapple-like growths from their crowns. Nice to walk through them, but after a 100 m walk, truthfully you have seen all you need to. Never mind, people clearly come here for picnics….

Of more interest was a visit to an unusual bar nearby. This must be the only one that is inside (yes) a tree. The vast ancient baobab has one of its two huge trunks completely hollow, into which an enterprising soul has created a tiny bar. We’d timed our arrival in time for a nice pint, but alas, it was not to be – the bar was shut for drinks and we had to satisfy ourselves with a soft drink from the fridge in the house next door. 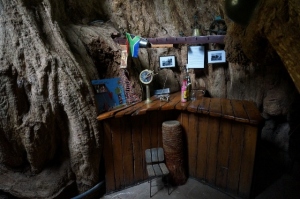 Reminiscent of The Hobbit!

The journey back was only broken by a pleasant fish curry lunch in Polokwane, then it was the long drag to Johannesburg on cruise control broken only by having to pull up at the toll booths. No matter, it was a nice first outing in our car.

This entry was posted on February 28, 2015 by fb425 in Intervening Travels and tagged Debengeni Falls, Sunland Baobab, Tzaneen.