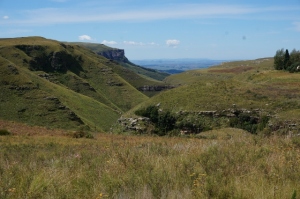 My wonderful wife decided that we needed a break, and as Easter this year arrive close to my birthday, she made her plans for us to take a week away. Refusing to tell me where we were heading, some 4+ hours later, we crawled up a gravel road in the Drakensburg Mountains, surely one of the worlds most beautiful places and a real favorite of mine.

The first hurdle was that there was a confusion in the booking, as they had decided to book us in for the following week! Too tired to argue, we accepted the temporary fix of a night at the adjacent lodge, to return the next day. No matter, (apart from A being quite miffed), we went hiking up in the mountains the next morning. A glorious day with stunning scenery, the view from the top was breathtaking. Looking over the myriad valleys and mountains, the only sound heard was the faint buzz of a small plane, a mere speck against the slopes opposite. 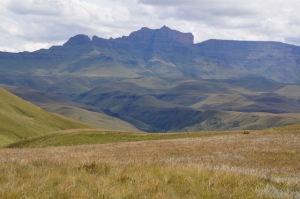 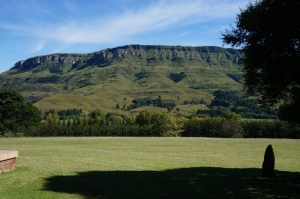 The food that night was a magnificent feast, course after course, each small but exquisite. A return visit is definitely needed to the Cleopatra Mountain Farmhouse!

So the next day it was off to our 2nd venue some 40kms away. Actually more like 100 with our mountain track detours and the gravel roads, (taken at a crawl to avoid stone chips on the new toy). Now what more could one ask for but to go and stay at a brewery? Bit of a shame that we did not like their beers 😦  Never mind, a bit of pub grub should perk us up. Er, no, that was a thumbs down, made all the worse by a screaming hoard of eminently sacrificial children. 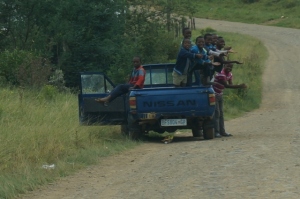 When you abandon your car, boys will play!

Then came the panic phone call from the UK. Elderly parent relocated to hospital thanks to couple of falls. Other parent in a tizz, daughter in full Red Cross mode, thankfully holding all together. A drive out to visit a monument to Mandela where he was captured for 27 years of prison. A very clever sculpture made of vertical steel posts that only gives its message at a certain viewing point. 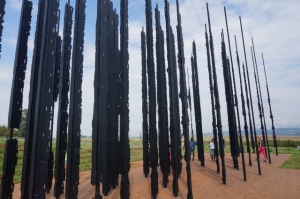 Then to see another magnificent waterfall all during which call after call with the UK continued to elaborate on the difficulties there.

Decision taken to head back  to Jo’burg after church next morning. Our one consolation was to be a good meal out at a recommended nearby Italian. More disappointment as the best course was the wine…..

More calls during the long drive back, culminating in the decision that Annemarie needed to fly back to take over from daughter before the working week starts after Easter Monday. The was literally just time to book a flight and unload the car before we had to get her to the airport shuttle.

So much for the restful break…….

This entry was posted on April 6, 2015 by fb425 in Africa, Intervening Travels and tagged Cleopatra Mountain, Mandela Capture Site.