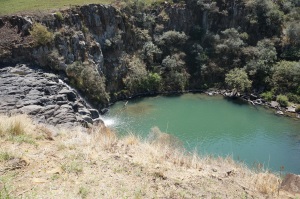 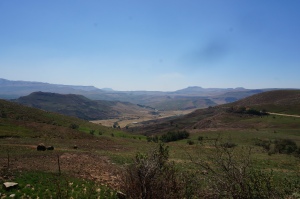 After an exchange of emails with the next hotel that worried me we might have booked into Fawlty Towers (SA), it was a case of a long drive or long frustrating phone calls. In short, the confirmation was for earlier dates than requested, but we decided we could make the 800km drive and save a day.

Ignoring the satnav, we took the road from Nottingham Road to Himeville. This has to be the most spectacular scenery you will see anywhere, period! Whilst much of it is dirt road, the views are just stunning and on a scale we have never experienced. This is BIG country in all it’s glorious variety. The photos do not do justice to the sheer scale nor to the beauty of it all.

At the end of this road, assuming your hire car has not fallen apart (a Chevrolet Crude, sorry Cruz,) – no, it’s time to go off on a tangent. Jeremy Clarkson would really not be kind to this car. The automatic is ok on the flat, ……. provided there is no headwind. A slope can upset its workings and without warning the engine flips to a near terminal scream. Overtaking is best planned with a calendar and a set of Dr Dre’s serving up Chris Rea’s Road to Hell at volume!

Back to the trip, at the end of the road is Himeville, a sleepy street with an unexpected gem. The Rose & Quail is a little tearoom next door to Himeville Detectives (honest!), which serves tasty homemade fare. The natives are exceptionally friendly here. The owner of this bakkie spotted me taking the photo, and came into the tea room to explain. Having introduced himself as the owner of the truck, it was a relief to hear that the sign was not indicative of unusual sexual preference, but a play on Keat’s poetry “a thing of beauty is a joy forever”. It appealed to him as a cattle breeder!

The next part of the mammoth drive was through the Eastern Cape, the most overtly African populated part of the country I have seen so far. There seemed to be housing almost continuously the whole drive from Kokstad to where we turned off close to East London. The towns we went through were vibrant scenes of chaos; places where only the terminally insane would brave the roads. Parking was wherever the drivers felt so inclined and traffic lights served only as pavement decorations for the swarms of minibuses, with other drivers opting for the opposite side of the dual-carriageway at times!

Oh, did I forget to mention the 50 kms of roadworks on the N2? It was ok at the start, but then the drivers started racing in a free for all when the lights tuned green, and again the minibuses just went ahead regardless of colour! After a while, the road simply became a racetrack with all the drivers, trucks included, so fed up with the delays that it was pedal to the metal at the first opportunity. It was also time to prove that the Crud has crap handling to add to its list of driver benefits 😦

It was so good to arrive at Morgan Bay and the hotel mid-evening. Yes, dinner was still being served, and what excellent food it was too. No Fawlty Towers this, to our great relief.