Unfinished business & the 1st Outing for the Landy

After a flying visit to Makro to get a basic toolkit, we hit the road south towards Durban. Curiosity took us off the highway at Harrismith to see if the road past Sterkfontein Dam was still unfinished, and yes, a year on and no change! I wonder what happened to the money for the repairs…..

So a mix of tarmac and dirt roads to Himeville that left The Beast unfazed if dusty. A night stop at the Himeville Arms was amazing value given the good food and comfortable beds. Daniel was up slightly earlier, and had decided to fix a lazy rear tail-light. An hour later, with lots of blown fuses and a reassembled Landy, it was off to the Sani Pass. Remember this from last year, and the aborted run up in the BMW? 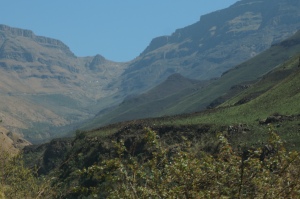 The scenery was just as stunning, but at least we reached the border without worrying about ground clearance. The South African border formalities were just a simple stamp in the passport, and it was time to climb! And oh boy is it a climb! Up and up on a single track steep gravel and rock, and 4-wheel drive only by law until at last you crawl over the brow to the Lesotho border post. Another stamp and you enter a different world. Thanks to the Chinese, the road thereafter is being rebuilt and upgraded to tarmac, so for now you drive on a wide, relatively smooth gravel road for so many miles, climbing yet higher. Not for nothing is this called the mountain kingdom. 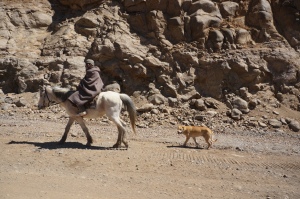 Maps are a bit of an enigma. To be sure they look the part, but they cunningly disguise their inadequacy. For that inviting red line ought to herald a simple journey between 2 towns. So in our enthusiasm, we took it at face value, and took the road from Mokhotlong to Thabo Tseki. Actually, I misdescribe it, for it deteriorated rapidly into a rock-strewn goat track fit only for the bravest of goats. As this is Africa, yes, the inevitable Toyota minibuses still ply their trade along it, albeit with 4-wheel drive. The passengers must emerge as a sort of organic mush after a few hours on this route! 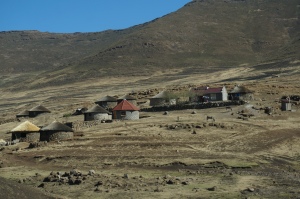 Some sections were 1st gear in low range, making just a handful of kilometers in an hour.

We met up with some bikers on one hill, pleading for oil after holing the side of one engine after sliding off the track. They were heading for the same destination, Katse, but their ride would be tortuous. Here there are no petrol stations, cafes, or any other facilities, just odd huts that have a few goods for sale. Thabo Tseki was driven through rapidly in our haste to do the final 60km to our stop.

Long after dark, with gritty eyes and a horrendous thirst, we crawled up to the hotel, the total opposite of the previous night’s experience. But after taking some 12 hours to travel 260 kms, sleep was welcome…..

One comment on “Unfinished business & the 1st Outing for the Landy”