Its all been a bit hectic… 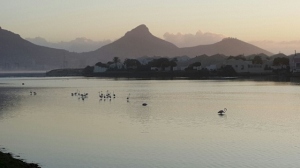 We have been rather quiet, so here is a bit of an update

After a manic decommissioning of Freebooter in Grenada at the end of June, it was back to the Southern Hemisphere. Only for the return to coincide with a whole raft of business and personal challenges.

With dire timing, we both ended up in hospital at almost the same time, and became a right pair of crocks! Neither of us was able to do a thing for a time, added to which we had to move to an apartment whilst Annemarie was laid out in hospital. Suffice it to say that it was only thanks to brilliant support from friends that we survived it all.

Just to complicate matters further, there was the minor matter of potentially buying a beachfront apartment in Cape Town. So life has been pretty involved, hence the near radio silence.

Before you say it, yes, this is disrupting the sailing escape plan. We are all at the mercy of ‘events’, both challenges and opportunities. Family circumstances dictate the necessity of being within ready reach of the UK, so sailing into the Pacific is not a realistic option for the time being. Also there has been pressure to commit to doing business here for a bit longer, so we are going to take opportunity to explore some of Africa with all its fascinating sights and experiences, (as well as sailing in the Caribbean!).