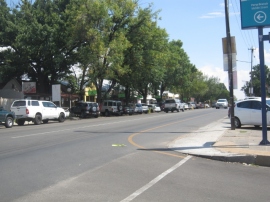 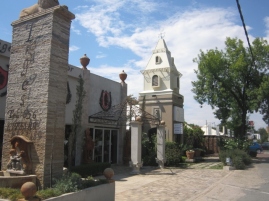 Looking for somewhere different for a day out, a colleague suggested Parys, (pronounced Par-ace). Apparently named after Paris, the two places could not be more different. A quaint little town sited in the former crater of the second largest meteorite to ever hit earth, it is now a haven of arts, crafts and ‘antiques’ shops. Actually it is a large amount of ‘junk’ interspersed with some gems.

In one junk shop, there was an astonishing mix of old school desks, church pews, lawnmowers and… crates of old army boots. Indeed one huge crate just of left-hand boots! Presumably somewhere around SA is a whole battalion of men with only right legs……… (The Peter Cook/Dudley Moore sketch about the one-legged Tarzan springs to mind !) 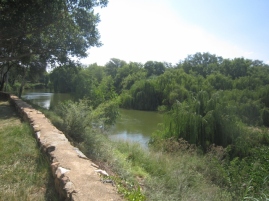 It is also known for its picturesque Vaal river, and an early 20th century pedestrian suspension bridge giving access to an island. Once the venue of many a summer picnic, the island has since been annexed by the local golf club, and the bridge is now closed off to prevent any such ‘unwelcome’ intrusion. 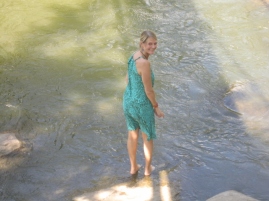 Ps. The blog has been very quiet of late, mainly due to an unmentionable four-letter word, work! Hopefully we can prevent it intruding too much going forward….