We heard of an island institution by way of a particular distillery, River Antoine, or just Rivers to the locals. A warning was given by the helpful chap replacing our mast light to take care as its products were used by some of the less sociable members of the community! Some of the initial research on the Internet encouraged the visit, but even so, we were not prepared for what we found!

I say found, but it was not that easy. Remember the lack of signposts? After a couple of hours of driving up and over the mountains, a number of wrong turns, and some misdirection, some buildings appeared in roughly the right place. Not even a board to say what was there, it was only when we crept into the yard that our suspicion was confirmed. This ramshackle collection of crumbling buildings is the home to a centuries-old distillery. Gloriously uncontaminated by subsequent investment, the original machinery from Derby is still in use. The guided tour left us speechless, finishing as it did with a tasting. 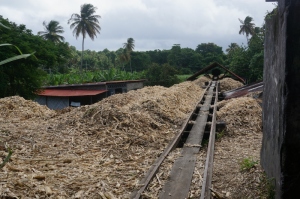 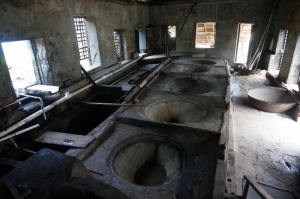 Fermentation starts – you really expect to drink that?

Getting your Proof right….

Stumbling back into the car, we made for the Belmont Estate. (Passing a village kiosk that advertised itself as ‘ice cream pallor’ , we concluded that others might have also tried the local rum….). From the ridiculous to the sublime! This is a unique place to visit as a key claim to fame is that they make chocolate from growing the beans right through to selling the bars. Again the guided tour was fascinating, you really have no idea what goes into making a good choccy bar. Walking through the trees, our guide plucked a cocoa pod from the tree. Splitting it open, we sucked the succulent fruit surrounding the seeds (beans). 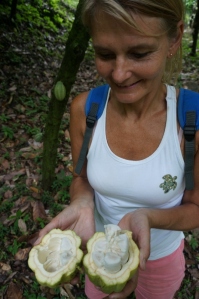 Harvesting leads to fermentation (really), before drying and polishing of the beans. The traditional process for the latter was more akin to a mating ritual than agricultural necessity, involving as it did several people in very close proximity ‘dancing’ in a large copper bowl whilst rubbing cocoa beans with their feet!The tour ended with cups of hot cocoa tea (delicious) and sampling lumps of chocolate, before lunch in their restaurant. (That also included as a dessert the richest chocolate cake going 😀.) Great Creole fish, but the Christmas Muzak seemed very misplaced….