I know we have mentioned this before but…

Johannesburg has a growing challenge with all sorts of begging at the robots (traffic lights). The presentation of their visual pleas ranges from the physically disadvantaged, to the acts of abject pathos, to cardboard signs, the blind being led, and the mothers with babies. 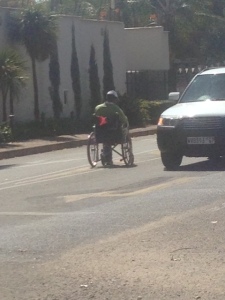 You would have to have hearts of stone to remain unmoved, and yet…..we have been asking questions as to how one can help. Sadly all is not necessarily as it seems:

Many are on drugs, often a horrific cocktail of rat poison and HIV retrovirals, which is extremely addictive and rots the brain. (Sadly the life expectancy of these poor lads is just two years on the streets.)

There are repeated stories of wheelchair occupiers suddenly running away when police come too close. 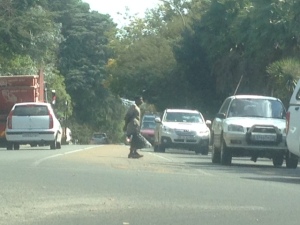 and then there was the reported sighting of the “shift change” of a number of varying ‘types’ of beggars at the highway off ramp ……….

There are gangs organising the begging, preying on Zimbabwean and Mozambiquan men who beg for money in return for their families back home getting some small amounts of food. 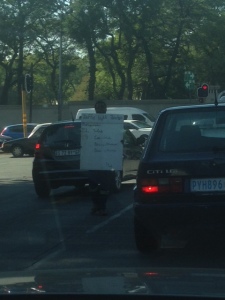 And the children are not always with their ‘mothers’, but rather borrowed for the purpose. Recently I heard of a maid who was in the habit of ‘borrowing’ her employer’s child. She was only found out at the child’s birthday party when another mother recognised the little girl from the road junction. 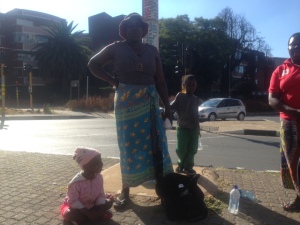 So whilst there is unquestionable need, giving money is almost certainly just feeding the problem. We choose to give out cereal bars that are mostly welcomed and immediately eaten, but sometimes it is made very clear that only money is wanted.

This is all quite a shock for visiting Europeans, but sadly it is a fact of life that is starting to spread to other cities here. It was noted that in Cape Town, many of the robot hopefuls are white, from young to old.